With a very busy February vacation week ahead of us and three kids having their own separate space to play in and enjoy, we do not know why we didn’t do this project sooner!
We currently own our home in Westwood and it has served us very nicely. We bought the home several years ago with plans in the back of our mind to renovate the basement. My wife and I work during the day, everyday; so although this was an idea and something we knew we wanted to move forward with the timing never really seemed to make sense to us. After years and years of pushing it off, we finally scheduled a time to meet with several basement finishing companies and were ready to pull the trigger.
After researching and comparing designs, options, material quality, durability, and style, a week after we received all of our quotes back, we decided to move forward with KAKS Basement Finishing and Design based out of Hanover, MA.
Everything we asked for they delivered upon. It was that simple. Steve (the owner) made the process simple and easy for us while his team worked diligently to complete the space for our family!
This space was designed originally for added living space and some clothing storage, but has morphed into the most enjoyable space in our home for us but also for our kids. We have a couch and TV, but also a carpeted area where our son and his friends play knee hockey. Our daughter (almost 17) hosts her group of friends frequently.
My wife and I had always though we should wait for the ‘right time’ and push it off because we always were always so busy, but the truth is, the space has been so usable and helpful to our family life that we wish we hadn’t waited so long. After going through the process, our only regret is truly that we waited so long. If you are in the market for a basement, please, do not wait! It is the best decision we have made to improve our home.

Basement Finishing on the South Shore, remodeling extra basement space into a usable area is becoming more and more popular. My friend and homeowner Meredith from Hanover was looking to refinish her basement into a new office and extra bedroom. She had a few companies out to give her free estimates…
“Not all basement finishing companies are the same”, says Meredith.
Meredith told me about long, drawn-out home consultations with basement finishing companies that went on for hours, with pressure to sign before the salesperson left. She wasn’t impressed with their tactics or style of presentation.
She had a local basement finishing company from the South Shore come out, and she told me all about it. “They were quick with measurements, no pressure, no sales tactics, actually walked me through with design ideas. I really liked their vision. A few days later I received a price – honestly, it was a little higher than expected.”
Meredith confirmed, “I felt good about the price, knowing that the quality of the materials was much better, and the level of customer service I was receiving – great communication from booking my appointment to the layout of my basement – it was a much better experience than the other companies.”
It’s important to feel no pressure, without lengthy presentations. Materials that will last a lifetime, this was a must for Meredith. She got exact pricing, a great design, no pressure to sign, no wasted time, with no negotiating.
Meredith reminded me, “also knowing that the basement remodelers were from this area really helped to secure my decision.”

Steve Sweeney, owner of KAKS Home Improvement Services in Hanover, is on the real estate reality show “Flipping Boston.”
Hanover contractor Steve Sweeney of Kaks Home Improvement has signed on to do seven more episodes of the A&E real estate reality show “Flipping Boston,” airing in the fall. It follows the adventures of a pair of Massachusetts house flippers as they buy a home, renovate it and sell it (ideally) for a tidy profit.

Sweeney, who has run his family owned business for seven years, said the best way to increase a home’s value, is to increase its living space. That’s why co-stars Dave Seymour and Peter Souhleris brought him onboard to renovate basements. “A good basement is a slam dunk,” Sweeney said.

In the episode “War Next Door,” Sweeney dramatically transformed the basement of a three-bedroom Colonial in Lynn from a cold subterranean concrete cave into a warm 900-square foot living area with hard-wood floors, light coconut-colored walls with white trim.

“That Lynn basement was challenging. Most city homes are challenging. I had a lady in Quincy, she was like ‘I never step down here.’ Now she doesn’t want to go upstairs,” Sweeney said.

Sweeney uses an eco-friendly finishing setup called Impressive Basement System. He said it takes about a week (or two) for most build outs, which includes, floors, walls, ceilings, electrical and plumbing. “We can move pretty quick,” Sweeney said.

Filming is under way for season two. Sweeney has shot basement remodels in Rockport and Middleton. He’ll be on seven of the season’s 14 episodes. Sweeney said he was asked to do the whole season, but couldn’t because of the time commitment.

“It was a gamble going in. I wasn’t sure this will make good TV,” Sweeney said. “But, there is a lot of drama in home remodeling.” Mining that drama is something A&E and others of its ilk – HGTV, DIY and TLC – are already successfully doing. “Flipping Boston” joins the similarly themed shows “Flipped Off,” “Flip This House,” “Flip That House,” “Flip Men.” And so, while the real estate market remains shaky, the home television bubble continues to grow. Sweeney is grateful for the latter.

“‘Flipping Boston’ got great ratings and has catapulted us business-wise,” he said. Being on “Flipping Boston” was a stroke of luck. “I was at the Plaza with my daughter and a woman called to ask about doing the show. I thought my brother – who is a big jokester – put someone up to it. Turns out it was a referral from a past job. I still don’t know who it was.”

The four episodes from Season One are available via cable On Demand. You can also catch the repeats Friday, June 29, starting at 4 p.m.

Turn your basement into more than just storage space, but a gorgeous living space!!

There are so many possibilities that come to mind when thinking about remodeling a basement. You could turn it into the movie theater room of your dreams, your own personal gym,a magical playroom for kids,a hot new hangout spot for teens, or your own recreational area with a bar and sitting area.

A movie theater room in a basement is more than likely my favorite renovation. The basement finishing wall system that we use for these rooms are perfect. The reason for the walls being so perfect is they are acoustical along with our drop ceiling. So you can get all the surround sound you want down there and crank it up! The ceiling and wall panels act together to form a sound proofed room. Now on to the colors, this is my favorite part! Our company offers 25 color option for this basement finishing wall system. The two colors I personally love for movie theater rooms are the black suede panels, the red suede panels or the beige suede panels. They look just perfect in a movie theater room! This is an awesome idea for family movie night!

PLEASE EXCUSE THE LONG DELAY IN GETTING THIS LETTER TO YOU. ENCLOSED IS A LAMINATED COPY THAT I THOUGHT YOU MIGHT LIKE TO HAVE, OF AN ITEM WHICH APPEARED IN THE JULY 1, 2012 EDITION OF THE ENTERPRISE. IT IS VERY NICE PHOTO AND WRITE OF YOU AND YOUR NEW TV VENTURE. IN THIS DAY IN AGE, WHEN THE MEDIA SEEMS SO OBSESSED WITH HIGHLIGHTING THE NEGATIVE ASPECTS OF SOCIETY, IT IS REFRESHING TO SEE AN ITEM LIKE THIS IN OUR LOCAL NEWSPAPER. YOUR PERSONAL INVOLVEMENT IN THE OPERATION OF THIS POPULAR AND SUCCESSFUL TELEVISION SHOW IS TO BE COMPLIMENTED. FOR A NUMBER OF YEARS NOW HOME REPAIR SHOWS AND REAL ESTATE TRANSACTION PROGRAMS HAVE CAPTURED THE PUBLIC’S ATTENTION. PEOPLE OF ALL AGE GROUPS FIND GREAT INTEREST IN WATCHING ALL THAT GOES INTO THE ART OF CONSTRUCTION AND REHABBING. IT IS GRATIFYING TO SEE THE PROGRESS THAT IS MADE IN EACH WEEK’S SEGMENT, RIGHT UP INTO THE FINAL EPISODE WITH ITS BRIGHT, BEAUTIFUL, AND NEW FINISHED CREATION. YOU BRING YOUR OWN PERSONAL STYLE AND CHARISMA TO THE SCREEN THAT APPEALS TO A GROWING AUDIENCE. IT IS GREAT TO SEE A LOCAL BUSINESSMAN RECEIVE SUCH PROMINENT ATTENTION. OBVIOUSLY THIS IS A FITTING REFLECTION OF YOUR TALENTS AND SKILLS IN THE CHOSEN PROFESSION OF REMODELING. IN CLOSING I WOULD LIKE TO OFFER MY SINCERE BEST WISHES FOR CONTINUED SUCCESS IN THIS AND ALL FUTURE ENDEAVORS. GOOD LUCK AND GOD BLESS! 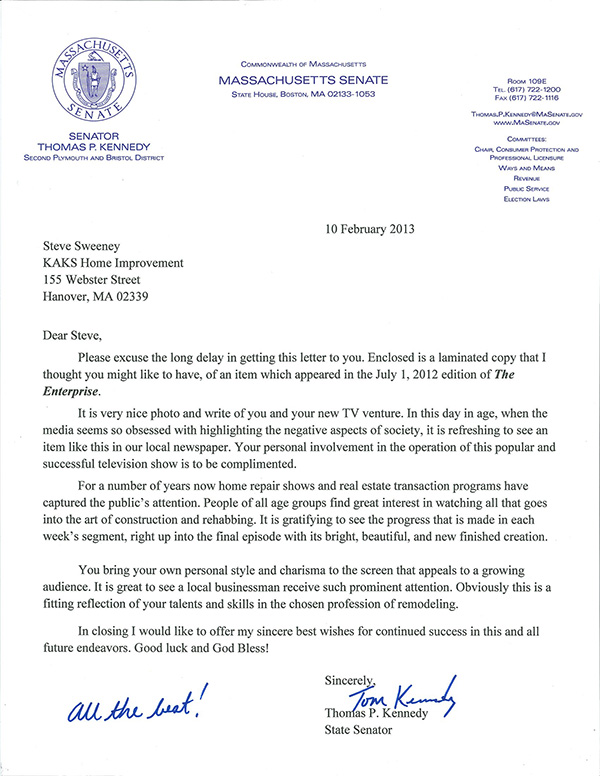 "When we were looking around for basement finishing companies we found Impressive Basements online. We realize it’s a renovation no-no but we didn’t even shop around for pricing because after talking with Steve and visiting the showroom, it was a no brainer to use them." - Nicole Siciliano Boquet

Get Started. No Sales Pitch. No Pressure To Sign Today. No Absurd Discounts Offered Today Only. Just Straight Facts & Best Pricing. Its Simple.