Steve Sweeney, owner of KAKS Home Improvement Services in Hanover, is on the real estate reality show “Flipping Boston.”
Hanover contractor Steve Sweeney of Kaks Home Improvement has signed on to do seven more episodes of the A&E real estate reality show “Flipping Boston,” airing in the fall. It follows the adventures of a pair of Massachusetts house flippers as they buy a home, renovate it and sell it (ideally) for a tidy profit.

Sweeney, who has run his family owned business for seven years, said the best way to increase a home’s value, is to increase its living space. That’s why co-stars Dave Seymour and Peter Souhleris brought him onboard to renovate basements. “A good basement is a slam dunk,” Sweeney said.

In the episode “War Next Door,” Sweeney dramatically transformed the basement of a three-bedroom Colonial in Lynn from a cold subterranean concrete cave into a warm 900-square foot living area with hard-wood floors, light coconut-colored walls with white trim.

“That Lynn basement was challenging. Most city homes are challenging. I had a lady in Quincy, she was like ‘I never step down here.’ Now she doesn’t want to go upstairs,” Sweeney said.

Sweeney uses an eco-friendly finishing setup called Impressive Basement System. He said it takes about a week (or two) for most build outs, which includes, floors, walls, ceilings, electrical and plumbing. “We can move pretty quick,” Sweeney said.

Filming is under way for season two. Sweeney has shot basement remodels in Rockport and Middleton. He’ll be on seven of the season’s 14 episodes. Sweeney said he was asked to do the whole season, but couldn’t because of the time commitment.

“It was a gamble going in. I wasn’t sure this will make good TV,” Sweeney said. “But, there is a lot of drama in home remodeling.” Mining that drama is something A&E and others of its ilk – HGTV, DIY and TLC – are already successfully doing. “Flipping Boston” joins the similarly themed shows “Flipped Off,” “Flip This House,” “Flip That House,” “Flip Men.” And so, while the real estate market remains shaky, the home television bubble continues to grow. Sweeney is grateful for the latter.

“‘Flipping Boston’ got great ratings and has catapulted us business-wise,” he said. Being on “Flipping Boston” was a stroke of luck. “I was at the Plaza with my daughter and a woman called to ask about doing the show. I thought my brother – who is a big jokester – put someone up to it. Turns out it was a referral from a past job. I still don’t know who it was.”

The four episodes from Season One are available via cable On Demand. You can also catch the repeats Friday, June 29, starting at 4 p.m.

Yesterday was so much fun here at KAKS Basement Finishing and Design. Bryan (design consultant) and I Kaylynne (Project manager) came into work yesterday and got a huge surprise from our boss Steve (owner). He packed us in his car and said we are going on a little road trip to Danvers, MA. There is never a boring day here at the office and that road trip was far from boring, boy can Bryan sing! “You are nearing your destination” the navigation said and we noticed this gorgeous neighborhood we were in. Then we pull up to this huge beautiful brick house. Still not knowing what is going on me and Bryan followed Steve into the basement to find two of our greatest installers Curt and Scott. At this point they have already framed out the basement with our steel studs and they were in the process of putting up the ceiling grid. It looked wonderful down there! Curt and Scott are just so neat and clean and you can barely tell these two guys were working so hard out of the basement, and so efficiently!  Next thing we know we have people with cameras down there! 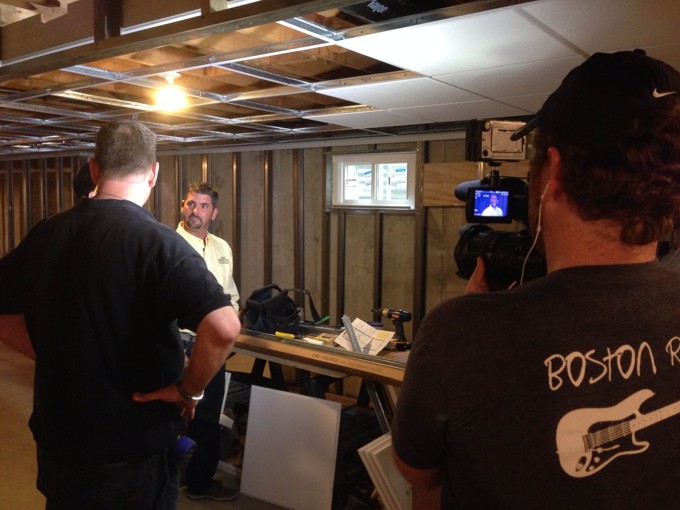 Come to find out we were in the middle of our first basement remodeling  shoot for our fourth feature on A&E’s New England based  hit series Flipping Boston.  We met with one employee from Departure Films Carly and she explained the story line to us. Bryan and I were in “AWE” thinking that this was such an amazing experience actually getting to see how the T.V. show is created. It was extremely mind blowing. After she explained everything to us and how it was all going to operate we met the stars of the show Dave and Pete.

The story line Carly prepared for us for this episode is by far the most important one of all. She had mentioned that some of the show would be filmed at the job site and some at our newly renovated showroom located at 155 Webster street Hanover, MA.  This episode is extremely important to us because there are a lot more focal points on our basement finishing product and company. During each take they were having a conversation about the benefits of our company and the products benefits. Three main topics Dave kept bringing up were how awesome the products perform in a basement environment, how it greatly reduces the sound and noise, and how much value it will add to your home. He kept saying how beneficial it could be for someone with kids to have this type of space in their home. It is important to know the basement environment and how important it is to use the right products when finishing a basement. Our wall panel system that is completely breathable and made out of 100% recycled materials does not contribute or create mold or mildew, such as traditional building materials like drywall or other organic building materials. So between the dent resistant sound proofing wall systems, to the acoustical ceiling tiles, to the scratch and stain resistant vinyl flooring these products are hands down superior to any other product. Also with this being environmentally friendly it adds great value to your home for resale. 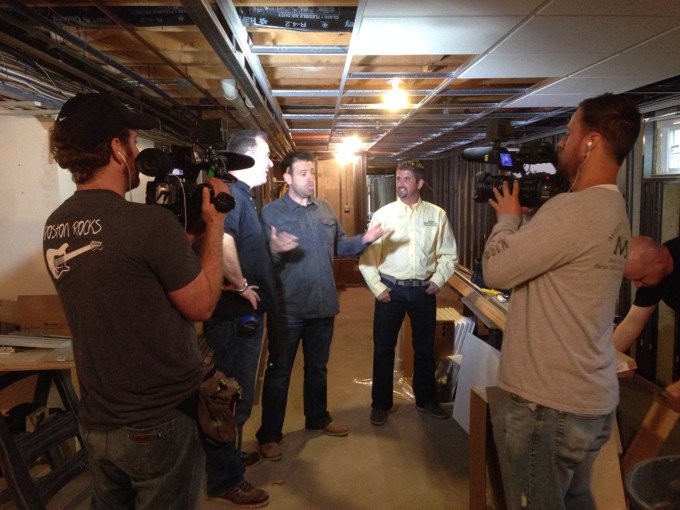 Talking and having a conversation with a bunch of cameras in your face is far from easy. Although working with Dave and Pete it seemed to be a breeze for Steve. The conversations were flowing so naturally and they were very funny and quite entertaining. They kept cracking jokes and busting out some funky dance moves (cutting the rug).So the moral of my story and what me and Bryan learned is that Reality Television is easiest when you just let go and be yourself. Steve eventually didn’t even realize the camera was there. We greatly appreciate this opportunity and would like to take the time to thank A&E’s Flipping Boston, Departure Films, City Lights, and Dave and Pete.

"Impressive Basements keeps their word! Four years after they redid my basement I had to take down a wall in order to remove an old oil tank. When I needed help putting the wall back together they arrived the day after I called…no questions asked! It now looks like it did when it was first done. Thank you, Impressive Basements!" - Judith, Bellingham, MA

Get Started. No Sales Pitch. No Pressure To Sign Today. No Absurd Discounts Offered Today Only. Just Straight Facts & Best Pricing. Its Simple.